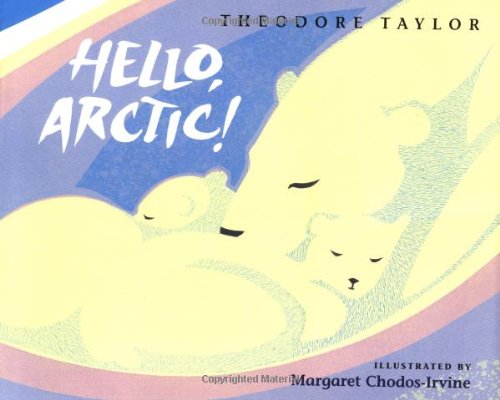 In his picture book debut, Taylor () marks the cycle of seasons in one of the world's most remote locations. "Arctic winter is cold, so cold./ The northern lights flicker across the dark sky./ But now Arctic summer is coming!" Taylor begins. Chodos-Irvine's () otherworldly prints, rendered from a variety of techniques, provide a breathtaking accompaniment. Her compositions seem as straightforward as Taylor's language, but her subtle layering of colors and shapes invites the eye to linger. In the opening spread, for instance, a lone wolf stands on the frozen tundra, gazing toward a low moon. The artist represents the landscape via an amalgam of rough-woven lines of white and ivories infiltrated by irregular, overlaid fields of beiges, blues and violets; the ground looms large and vast below the narrow slice of sky. As the temperature warms, Taylor issues a welcoming chant to the birds and flowers, while the palette brightens. A serene flock of birds undulates across the sky, its curve contrasting gently with the rolling edge of the blossoming shoreline below. Subsequent spreads dip below the surface of the ocean to reveal seals, walrus and whales. As the days grow shorter, text and illustrations circle back to the beginning. The birds fly south against a striated sunset; a polar bear and her cubs, their forms delineated chiefly by finely etched negative space, curl up in a golden heap, encircled by variegated layers of snow and ice. Immediately accessible yet meditative, the art will grip audiences on many levels. Ages 3-7.