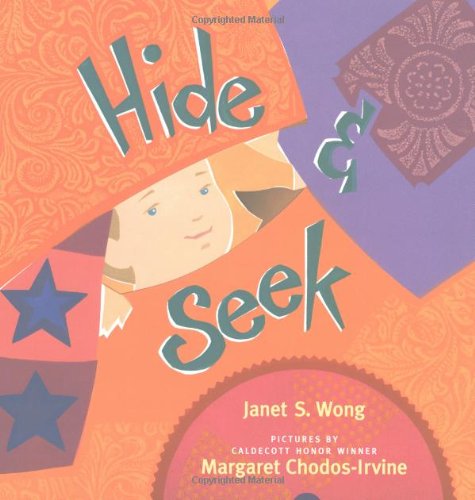 When Dad puts the chocolate chip cookies in the oven to bake, he and his son—and their pet dog—have just enough time for a game of hide-and-seek. As Dad (the seeker) calls out each number from one to nine, the boy and dog audition various hiding places around the house. At "3," a big box is considered, then abandoned at the count of "4" as too effective ("Hide mean hide the whole day"). The boy vetoes the pet's choice of a garbage can at "5" ("You want to stink?"). Finally, as Dad sounds "9," the pair burrows under the pillows "in the great big bed"—although it's hard to stay hidden when the oven timer goes " " Wong, who collaborated with Chodos-Irvine on and , contributes a few well-chosen words to each page. But this is really the illustrator's show. Once again, Chodos-Irvine works magic with a printmaking style that produces bold, high-contrast shapes resembling cut paper. Her sense of composition is faultless; she picks just the right angle to make the most of a hiding place's assets. And while she favors big, solid forms, she seems to revel in energizing them (she's especially good at capturing the dog's restlessness). Youngsters will love seeing how the hero's deductive reasoning garners him both a cool hiding place and a tasty reward. Ages 2-5.