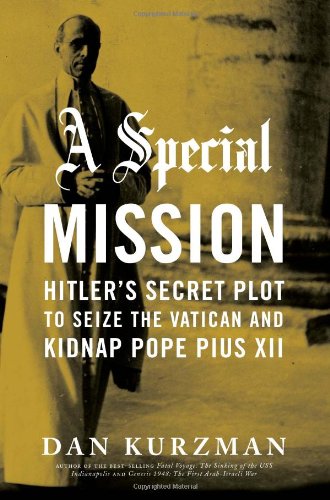 eteran popular historian Kurzman ( ) relates how a Hitler-Himmler order in 1943 to kidnap the pope and seize Vatican files and treasures was twice delayed and finally undermined by a group of high German officers and officials in Rome. The foilers were headed by the SS leader in Italy, Gen. Karl Wolff, whom Kurzman interviewed before his death in 1984. Kurzman demonstrates that Hitler wanted the Vatican neutralized because he thought the pope had aided the overthrow of Mussolini in 1943 and feared that the Church’s leader would denounce the Final Solution in general and the imminent deportation of Rome’s Jews in particular. Wolff and others in Rome, meanwhile, hoped to use the pope as an intermediary for a negotiated peace and an Anglo-American-German campaign against the Soviets. Kurzman also touches upon such related topics as the 1933 Nazi-Vatican Concordat, how Pius’s silence on the murder of the Jews was partly rooted in excessive fears of a Soviet takeover of the Vatican, and the curious role of Rome’s chief rabbi, Israel Zolli, who ultimately converted to Catholicism. Kurzman does a good job of telling a suspenseful and little-known story of WWII intrigue.