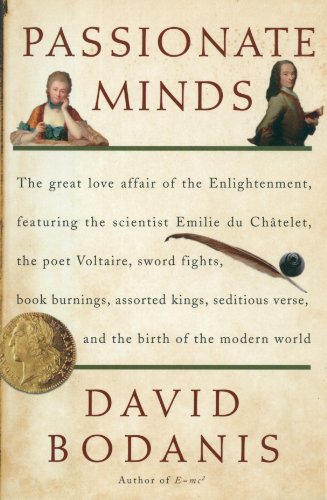 The passion overshadows the minds in this breathless account of the decade-long love affair between Emilie du Châtelet, a rare 18th-century woman scientist who wrote an influential commentary on Newton's physics, and the notorious Enlightenment thinker Voltaire. There's plenty of action and romance in the story, set against a backdrop of haughty aristocrats, blasé adulteries and rancid court intrigues. Mme. du Châtelet and Voltaire fall madly in love, quarrel, take other lovers, split up, reconcile, renovate their chateau and again take other lovers. Meanwhile, their talks about (and inept experiments with) physics and philosophy, the author contends, spurred both to dizzying heights of creativity. Bodanis ( ) adopts a mild feminist stance in styling du Châtelet as a brilliant intellect thwarted by male chauvinism. But Bodanis's frustratingly sketchy rendition of du Châtelet's work makes a weak case for the claim that she was a major scientific figure. With the science given short shrift, du Châtelet seems defined mainly by her relationships with men and is effortlessly upstaged by Voltaire as he alternately jousts with, flees from and kowtows to king and church. Bodanis's crowd-pleasing focus on lively domestic melodrama—complete with a vignette of du Châtelet "lounging naked with a handsome corsair's son"—belittles rather than enhances her intellectual stature.