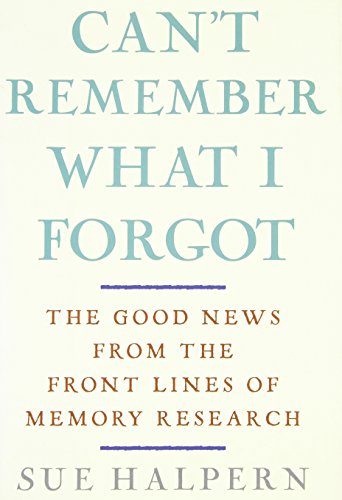 Can’t Remember What I Forgot: The Good News from the Front Lines of Memory Research

Novelist and science writer Halpern ( ) wades bravely into the morass of modern memory research to sort the truth from a wide assortment of “hyperbole and promises and platitudes.” The news is mixed: most of us won’t develop Alzheimer’s, but everyone will suffer some memory loss. After describing the different types of memory, Halpern gamely undertakes a series of brain scans used to reveal brain damage and tries diagnostic tests that measure memory through the ability to recall words, images and smells. Researchers have identified a gene closely linked with Alzheimer’s, but drugs to treat or prevent memory loss are still far from reality, Halpern says, adding that for many drug companies, the success of a remedy is measured only by how quickly it moves off the shelves. Armed with a mix of hope and healthy skepticism, the author also examines claims that eating chocolate (among other things) or solving puzzles can improve brain function. “So much of who we know ourselves to be comes from what we remember,” Halpern writes, and her timely book offers a vivid, often amusing introduction to a science that touches us all.