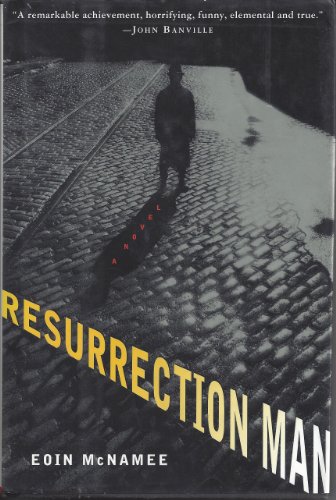 The publisher burdens this first novel by a young Irish writer with comparisons to such high stylists as Don DeLillo and Cormac McCarthy. Luckily, McNamee (first name pronounced `Owen') belongs in such heady company, for, like them, his intense mastery of rhythm and image can sustain the complexity of a world at the level of sentence even as he holds together the larger dynamic of the novel as a whole. Resurrection Man is remarkable for its poetic evocations of violence, human foibles, human suffering. The setting is Belfast in the 1980s; the Resurrection Men are a gang of four led by Victor Kelly, a Protestant drawn into the sectarian violence because his preternaturally silent father is rumored by some to be a secret Catholic, and because he himself is enamored of the gangster movies he used to watch with his mother. Victor is a ruthless killer; his M.O. is the knife across the throat. And it is McNamee's ingenious stroke to link this harsh silencing to blasted Belfast and the broken, inadequate state of words in a place where death and inevitability are etched everywhere in a much more immediate kind of language: he describes the night as a ``vernacular darkness''; Victor strips away layers of skin ``to arrive at valid words''; a dead man's head is ``bent to his chest as though there were something written there he could read.'' And at nearly every turn, McNamee describes natural events with quirky, sparkling precision that conveys the enormous depth of his engagement with his material and the reach of his imagination: a gang member's mother looks upon him ``in a narrow-eyed calculating manner as if he was being measured for some fitted garment of disapproval that she was preparing in another room.'' That is indeed McCarthy territory, but McNamee lays claim to his own turf in this charging narrative, which keeps the reader on the edge of his seat and is filled with deft overlapping, as one after another Belfast man is ``lifted'' by Victor and his boys and as Victor becomes a minor celebrity whose arc is finally projected and brought to a close by a mysterious double agent named McClure. The romance here-a woman named Heather is lover to both Victor and a journalist named Ryan covering the case-is sad, real and intelligently underplayed. Victor Kelly is a scarred thug, a mother's son, a creature of enormous complexity and mystery; and though some supporting characters remain slightly overshadowed by the narrative, this book is a chilling masterpiece and a brilliant debut. (Sept.)
close
Details