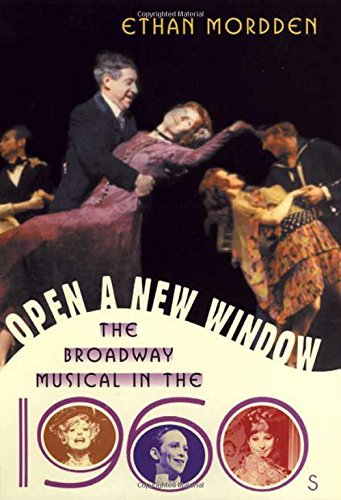 OPEN A NEW WINDOW: The Broadway Musical in the 1960s

The prolific Mordden () has juggled two different series in recent years, one fiction and one nonfiction. Now he offers the fourth title in the latter, a decade-by-decade history of American musicals, following on the heels of , about the 1950s. Despite Mordden's authoritative, scholarly approach, the book sings with stylish syncopation and chatty humor. The evolution and transition of 1960s Broadway was signaled by the failure of Irving Berlin's , Noel Coward's fading glory () and the beginning of ' four-decade run. New concepts emerged, and fresh talents like Bob Fosse and Stephen Sondheim took center stage. With in 1966, "the new age begins." Darker themes were introduced in , and . Detailing the decade's innovations, Mordden tosses in fascinating bits of theatrical lore and history. Hits () and flops () are deftly described with wit, panache and a clever, novelistic eye. Mordden never misses a cue, covering everything from off-Broadway () to the English musical. Regrettably, the lack of boldface subheads decreases the book's value as a research tool, since many titles are lost in the multitude. Still, scholars will be as anxious to read it as theater enthusiasts.