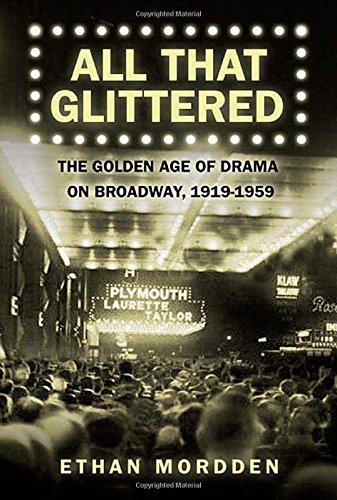 Acclaimed for his sprightly histories of the Broadway musical, the author turns to nonmusical theater in this scintillating survey. Mordden considers New York theater the wellspring of mid-century American culture, especially during the 1930s, when the advent of talkies forced a Hollywood desperate for material to ransack Broadway for scripts—and the talent that could bring their dialogue to life. Thus, he contends, "West-Central Manhattan" remade America in its own image—urban, sophisticated and racy, presided over by the wisecracking reporter and "that ubiquitous 1930s character, the Unmarried Sarcastic Woman," and tinged with an ironic gay sensibility. Mordden brings out his themes in an anecdote-strewn tour of significant (and some not so significant) productions, pausing now and again for set-piece drama criticism—comparing O'Neill's , for example, with Rachel Crothers's comedy —and perpetually tossing off witty asides (the sublimely square actor Ralph Bellamy, he observes, "brings the Clueless Hetero to a completion so absolute that [he] creates something never before thought possible or even necessary: the opposite of Kabuki"). Erudite, but casual and conversational, and full of fresh perceptions, Mordden is a charmingly insightful raconteur who condenses 40 years' worth of opening nights into a single engrossing montage. Photos.