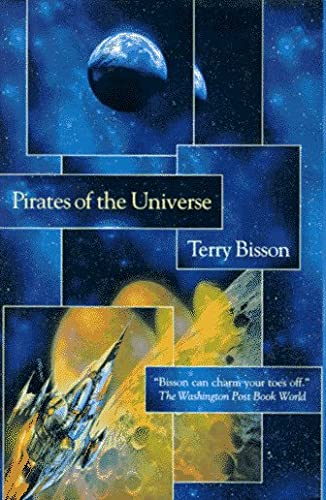 Pirates of the Universe

In the six years since the publication of his celebrated satire Voyage to the Red Planet, Bisson has published only short stories--one of which, ""Bears Discover Fire,"" won both a Nebula and a Hugo. Now Bisson has returned, with elan, to the novel to tell the adventures of Space Ranger Gunther (""Gun"") Ryder, who is one mission away from the coveted ""Pirate of the Universe"" title (and permanent resident, with his ""best girl"" Donna, in a Disney-Windows ""live-in theme park""). When Gun returns from an encounter with some ""Peteys"" (mysterious, unmanned spaceships that have revolutionized Earth's economy), he finds himself entangled in a Kafkaesque conundrum. Unable to access either his money or his e-mail, he moves vulnerably from bureaucrat to administrator, with each encounter more macabre than the last, until he realizes that he and his fugitive cousin must, literally, save the universe. In the hands of a lesser craftsman, this comic-book plotting would dominate, but Bisson's deadpan narrative and dialogue carry the day, as do his laconic and dysfunctional, but very empathetic, characters. Readers will want to root for Gun as he tries to make sense of goings-on, even as they laugh at his creator's sharply satiric observations and cheer his storytelling panache. (Apr.)
close
Details