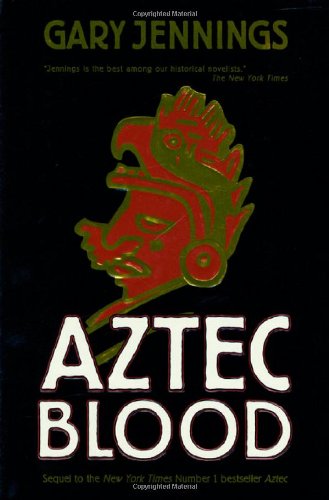 Never less than spellbinding, this golden tale is third in a series (after ) and follows the exploits of a mestizo boy (half Aztec, half Spanish) in 16th-century New Spain, struggling for survival against Spanish nobles in league with the Inquisition. Cristo the Bastardo spins his tale from a dungeon prison between bouts of torture before his hanging. Raised among the legions of social outcast , half-breed beggars hated by Indians and Spanish alike, Cristo is protected and illegally educated by Fray Antonio, a defrocked priest. When Fray Antonio is killed, 13-year-old Cristo is framed for the priest's death and only saved by the kindness of a young Spanish girl. Saved once again by a dashing rogue of a , an adventurer, bad actor and playwright named Mateo, Cristo chances into the hands of the Healer, a traveling Aztec shaman who takes him on as an assistant. When the Healer compels Cristo to wriggle into an Aztec tomb to steal gold, they are caught by Don Julio, a brilliant (converted Jew) and a powerful noble in New Spain spying for the king. "Enlisted" by Don Julio to spy on suspected rebel groups and silver mine thieves, Cristo plays the role of Don Julio's cousin and meets the girl who saved him, now betrothed to a villainous wealthy Spaniard linked to the silver thefts. But Don Julio is betrayed to the Inquisition, and Cristo is enslaved in the deadly silver mines. Jennings spins a dashing, glittering tale, sending the redoubtable Cristo and irrepressible Mateo through the dingy streets of Veracruz, lean Aztec villages, grand Spanish haciendas, deadly silver mines and teeming Mexico City. Injustice has seldom been so keenly sketched nor valor so compellingly portrayed as in this swashbuckling adventure.