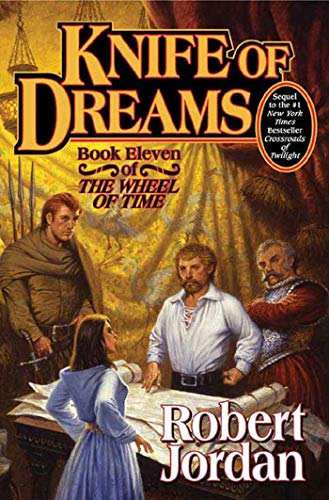 The previous book in Jordan's massive Wheel of Time, , may have come out in 2003, but don't let that fool you; the 11th tome in this epic fantasy is the one Jordan fans have been eagerly waiting for the better part of a decade. The breakneck pace, lyrical beauty and astonishing scope of the early Wheel of Time volumes established Jordan as one of the top writers in the Tolkien tradition. While more recent entries have maintained that beauty and scope, the pace has slowed to a crawl as the central characters dispersed in six directions. In contrast, the latest explodes with motion, as multiple plot lines either conclude or advance, and the march to Tarmon Gai'don—the climactic last battle between the Dragon Reborn and the Dark One—begins in earnest. Faile's captivity with the Shaido, Mat's pursuit of Tuon and Elayne's war for Caemlyn come to a close, while Egwene's capture brings the Aes Sedai war to the heart of the Tower. Jordan has said that readers will be sweating by the end of the book, and he's probably right. Sweating or not, they'll also be dreading the long year or two before the 12th installment.