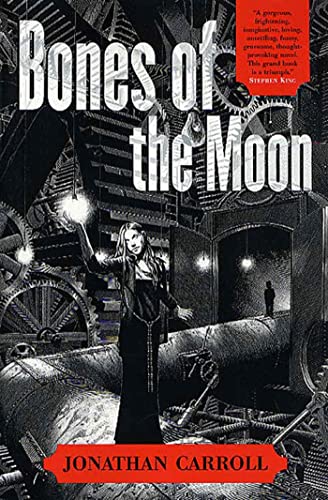 BONES OF THE MOON

Dreamtime effortlessly intersects with realtime in this reissue of one of British author Carroll's earliest successes, initially published in 1988 and the first of the loosely connected Rondua trilogy (; ). A beguiling young woman, Cullen James, narrates a tale of love and loss that never fails to delight, mystify and satisfy. In Cullen's parallel dreamworld of Rondua, a charming child named Pepsi and equally engaging talking animals go on a quest for magical bones that can save or destroy life. In the realtime world of New York City, life can be just as exciting and dangerous. "Axe Boy" Alvin Williams lives in an apartment upstairs, until he chops his mother and sister into pieces and is confined in a mental institute for the criminally insane. He later writes desperate letters to Cullen as part of his ill-advised therapy. Cullen's best friend, Eliot Kilbertus, a gay film critic who's as endearing as he is funny, introduces her to sexy Weber Gregston, a famous movie director who falls in love with her after she punches him out in response to an unwanted advance. And then there's Cullen's beloved husband, Danny, a gentle giant whose Italian basketball career was sidelined just around the time she became pregnant with Mae, their sweet baby who appears to intensify her Rondua adventures. When Cullen's serial dreams increase in vivid detail and make her face the consequences of past choices, both worlds catapult toward a final collision that's triumphant and tragic at the same time.