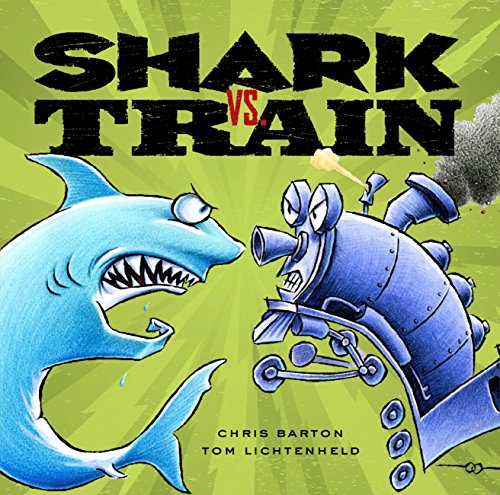 This is a genius concept—the kids' equivalent of a classic guy bull session, centering on two playmates' favorite toys. So, who's better—Shark or Train? That all depends. When trick-or-treating, Shark is the clear winner, thanks to his intimidating smile (“The clown is hungry,” he says, as a bowl of candy is poured into his bag). But in a marshmallow-roasting contest, Train triumphs by virtue of his built-in, coal-stoked rotisserie. Just when readers will think the scenarios can't get more absurd (bowling, a burping contest), the book moves into even funnier territory: hypotheticals in which neither comes out on top (their imposing presences make them ripe targets for getting shushed in a library, and their lack of opposable thumbs means neither is very good at video games). Lichtenheld's ( ) watercolor cartoons have a fluidity and goofy intensity that recalls magazine, while Barton ( ) gives the characters snappy dialogue throughout. “That counts as a strike, right?” says Shark, having eaten an entire lane of bowling pins. “This is why you guys have a bad reputation,” retorts Train. Ages 3–6.