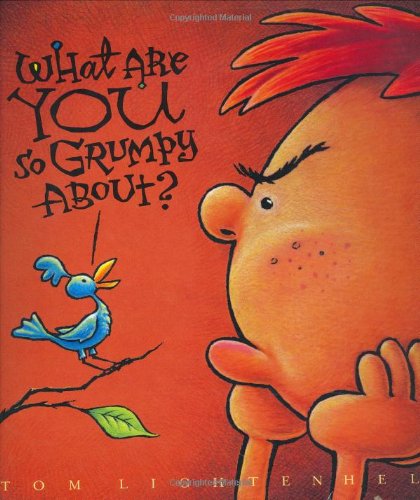 WHAT ARE YOU SO GRUMPY ABOUT?

In this light, playful caper, Lichtenheld () follows up the title's query with a series of others that pose possible causes for the characters' irritable affect. Each outlandish, humorously exaggerated illustration, outlined in thick black strokes to emphasize the cartoonish scenarios, make the case for the victims' foul mood. For "Did somebody leave the toilet seat up and didn't notice?" the accompanying two spreads depict two feet sticking up from inside the toilet bowl, followed by the resulting shrunken outfit the boy wears. "Did your gravy touch your peas?" shows terrified animated peas awash in a wave of gravy on a dinner plate, screaming "Flood!" and "Every pea for himself!" Other indignities that warrant grumpiness include parents forgetting to buy a child's favorite cereal ("Chocolate-frosted, Honey glazed, Pre-sweetened Marshmallow Nodules"), forcing him or her to eat the parents' "Boring Acres" ("No fat,... no sugar,... no fun" reads the cereal box); and a list of "about a million" chores, among them training the cat to fetch the paper and counting the leaves on trees. Lichtenheld's tale will appeal to kids with its on-target childhood humiliations and degradations. And parents may be pleased to see the way it takes the edge off most cases of discontent—especially with its gentle punchline. All ages.