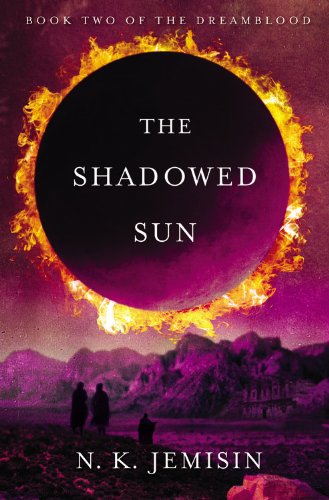 The Shadowed Sun: Book 2 of Dreamblood

Gujaareh, the city-state of dreams, is an occupied nation under the heavy hand of the Kisuati. Wanahomen, son of the insane ruler deposed by the foreigners and slain by the priest-assassins of the Hetawa (as described in The Killing Moon), could free his city from its oppressors, but he will need the support of patriots, ambitious aristocrats, Banbarra nomads, and the Hetawa themselves. The priests know Gujaareh needs a leader, but wonder whether Wanahomen carries his father’s madness; they send Hanani, the first woman admitted to the ranks of the dream-healers, to both aid Wanahomen and spy on him. As factions negotiate and scheme, a deadly nightmare virus spreads through Gujaareh. Jemisin eschews simplistic adventure tropes for a nuanced approach. Some Kisuati are admirable, some of Wanahomen’s allies are despicable, and the drive to free Gujaareh requires finding common ground for disparate agendas. The characters often fall flat, as does the romance between Hanani and Wanahomen, and rape and abuse are discomfitingly prominent themes, but the political intrigue and unusual setting are compelling and satisfying. Agent: Lucienne Diver, the Knight Agency. (June)
close
Details