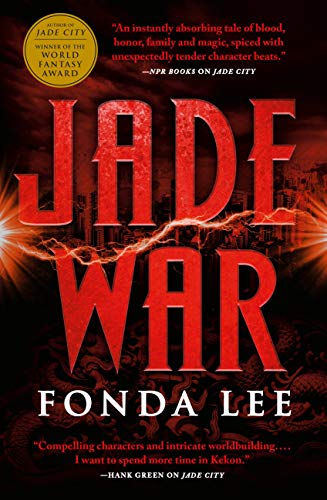 In this ambitious fantasy, which takes place in an Asia-inspired alternate present, rival clans battle for dominance over their island home, waging an economic, political, and physical war over the course of several years. Picking up where 2017’s Jade City left off, this installment sees the Kaul family of the No Peak clan working against the ruthless Mountain clan, fending off foreign governments, and trying to stamp out smugglers and opportunists. At the heart of everything is jade, a greatly coveted gem that imbues its bearers with amazing abilities and cultural status. While Hilo, the new leader of No Peak, settles into his role, his sister Shae must prove herself as his chief strategist. Meanwhile, their cousin Anden, who refuses to wear jade for the clan, is sent overseas as a punishment and becomes entangled in local issues. Lee’s story is sweeping, leisurely, and epic, and combines political intrigue with sharply choreographed action scenes, but it’s a character-driven family drama at its heart. Conflict ranges from delicate boardroom negotiations to dramatic duels, and from assassinations to all-out war, while the increasingly complex narrative continually ups the stakes. This worthy continuation of the larger story line delivers a satisfying tale and sets the stage for the next installment. Agent: Jim McCarthy, Dystel, Goderich & Bourret. (July)
close
Details