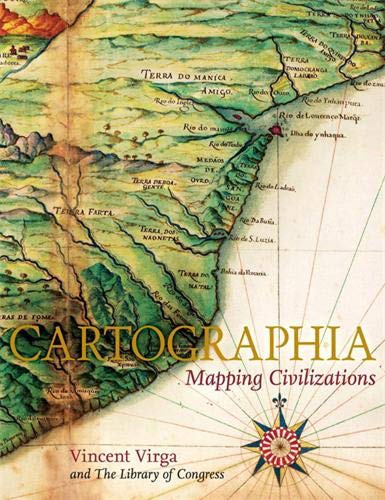 Drawing on the Library of Congress's 4.8 million maps and 60,000 atlases, this is an overview of cartography in different times and cultures. Veteran picture editor Virga upends our notion of maps as two-dimensional representations of physical spaces by presenting depictions of imaginative or spiritual territory: a 17th-century “map of the soul” has five entry points, each corresponding to one of the five senses. And while we're accustomed to maps being oriented north, Islamic and some other cartographers oriented their maps south, as in an eye-opening 1996 “Upside Down World Map” made in Australia that shows the “down under” continent approximately where we usually see Greenland. Virga provides historical, sociological and anthropological background to each map. Captions for the plates are so small as to be almost unreadable, making it difficult to follow Virga's interpretations of the maps. Still, this is one of those rare coffee-table books that deserves to be read, that repeatedly delights the eye while informing the mind about the rich variety of humans' attempts to orient themselves in the world. 201 color illus.