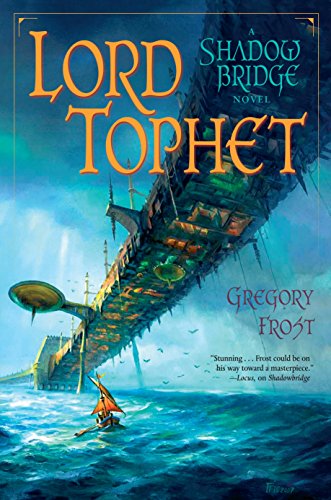 The “infinite bridge spirals of Shadowbridge” cover a watery world full of enchanting stories, the wonderfully eerie environment for this stirring sequel to 2007's . Gifted shadow puppeteer Leodora, who disguises herself as a man to perform under the name of Jax, finds herself whisked away to the nebulous afterlife called Edgeworld. When the gods return her to the town of Colemaigne, blighted by soul-devouring Lord Tophet, her presence restores it to its former glory, restoring buildings and drawing the adoration of the populace. Tophet, “the embodiment of Chaos,” furious at finding his curse has been broken, sends his sinister Agents after “Jax,” not realizing a mere girl is the legendary puppeteer. Frost brings the charm of an ancient storyteller and the wit of a contemporary tale-spinner to this dramatic tale, effortlessly manipulating his troupe of mortals and immortals and bringing the truths and myths of Shadowbridge equally to life.