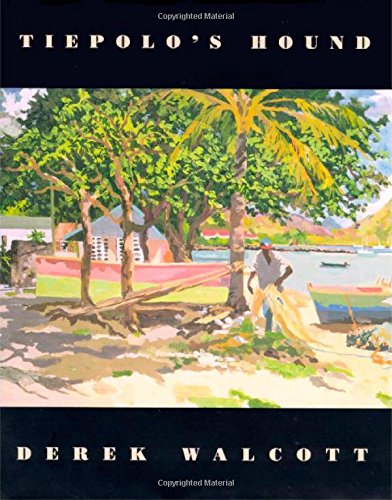 After writing the Odyssey of his native St. Lucia with Omeros (1990), the epic poem that helped earn him the 1992 Nobel Prize in Literature, Walcott has increasingly sought to sensualize the Caribbean landscape within the competing contexts of colonialism, history and Western artistc traditions. The dual narrative of his latest book-length poem looks at these inheritances by intertwining the career of impressionist Camille Pissarro, who was a Sephardic Jew from St. Thomas, with the poet's own quest to revisit a Venetian painting, of a hound, he once saw in New York. As a painter himself, Walcott associates his narrator's artistic island origins with Pissarro's in smooth, masterful couplets: ""I still smell linseed oil in the wild views/ Of villages and the tang of turpentine... Salt wind encouraged us, and the surf's white noise."" As the poet makes his way toward Venice and ""Tiepolo's Hound,"" his journey mirrors Pissarro's transition from St. Thomas to Europe. Place names serve as the poem's focal points, forming an extended near-sestina: the names Pontoise; Paris; the Seine; St Thomas's Dronningens Street and Charlotte Amalie; and the ubiquitous ""Tiepolo's ceiling"" appear again and again. While the repetitions give a powerful sense of cultural geography, Walcott is not committed to giving us his characters's whole story, but rather a sort of embellished art-history-in-verse, as he imagines Pissarro in Paris, or how Pissarro would have painted slaves, ""the umber and ebony of their skin."" The narrator's eventual reunion with the painting thus proves something of an anti-climax, as he hasn't generated enough psychological tension to sustain an epic. Still, Walcott's majestic linguistic vistas will be more than enough to carry readers through gorgeously imagined encounters with painters, painting and the visual nostalgia of the exile. (Apr.)
close
Details