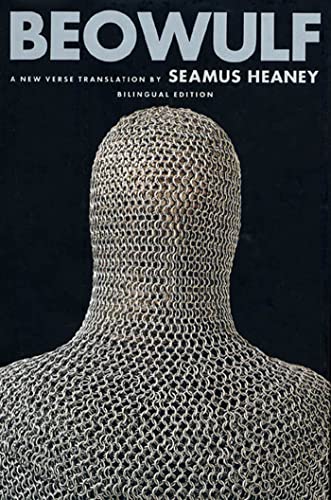 When the great monster Grendel comes to Denmark and dashes its warriors' hopes, installing himself in their great hall and eating alive the valiant lords, the hero Beowulf arrives from over the ocean to wrestle the beast. He saves the Danes, who sing of his triumphs, but soon the monster's mother turns up to take him hostage: having killed her, our hero goes home to the land of the Geats, acquires the kingship, and fights to the death an enormous dragon. That's the plot of this narrative poem, composed more than a millennium ago in the Germanic language that gave birth (eventually) to our version of English. Long a thing for professors to gloss, the poem includes battles, aggressive boasts, glorious funerals, frightening creatures and a much-studied alliterative meter; earlier versions in current vernacular have pleased lay readers and helped hard-pressed students. Nobel laureate Heaney has brought forth a finely wrought, controversial (for having won a prize over a children's book) modern English version, one which retains, even recommends, the archaic strengths of its warrior world, where ""The Spear-Danes in days gone by/ and the kings who ruled them had courage and greatness."" Well-known digressions--a detailed dirge, the tale-within-a-tale of Hengest, ""homesick and helpless"" in ancient Friesland--find their ways into Heaney's English, which holds to the spirit (not always the letter) of the en face Anglo-Saxon, fusing swift story and seamless description, numinous adjectives and earthy nouns: in one swift scene of difficult swimming, ""Shoulder to shoulder, we struggled on/ for five nights, until the long flow/ and pitch of the waves, the perishing cold drove us apart. The deep boiled up/ and its wallowing sent the sea-brutes wild."" Heaney's evocative introduction voices his long-felt attraction to the poem's ""melancholy fortitude,"" describing the decades his rendering took and the use he discovered for dialect terms. It extends in dramatic fashion Heaney's long-term archeological delvings, his dig into the origins of his beloved, conflicted--by politics and place--English language. (Feb.)
close
Details