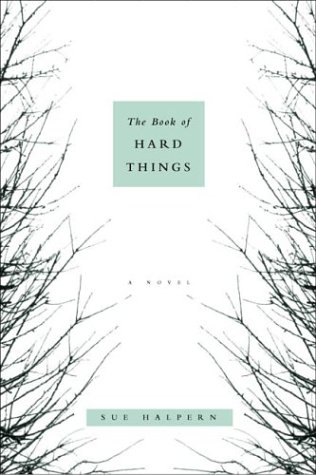 THE BOOK OF HARD THINGS

Polished and passionate, this debut novel by Halpern (author of the well-received essay collection ) is undermined by its unlikely premise: the friendship between a down-and-out backwoods 18-year-old and a 30-something cultural sophisticate. Homeless, aimless "Cuzzy" Gage has no job and no prospects in the tiny New England logging town of Poverty. His mother is dead, his father is in a psychiatric hospital and Crystal, his estranged girlfriend, is now the mother of his child. Some of these sad facts are meant, no doubt, to explain his utter lack of ambition and responsibility, but nothing can explain (despite Halpern's strenuous efforts) why Tracy Edwards, a Porsche-driving teacher with absolutely nothing in common with the local residents, takes Cuzzy into his borrowed home, the estate of his recently deceased best friend, Algie, an ethnomusicologist. Ostensibly, Tracy's acting on a request from Rev. Jason Trimble, who asks his congregation to be "real neighbors" to one another, and Tracy is searching for something to assuage his grief over Algie. But the alliance between Tracy and Cuzzy never rings true. Their intellectual differences are astronomical; their socioeconomic gulf is unbridgeable. Indeed, that gulf leads to a scene of horrific violence, which unfolds with a palpable inevitability (the best section of the book by far). The only character of real interest is Crystal, whose aspirations (culled from and ) are touchingly fantastic. Despite Halpern's often lovely prose, this earnest, self-conscious novel never manages to make real its juxtaposition of disparate worlds.