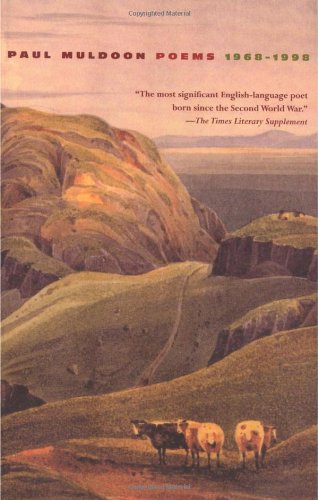 The best, most-honored Irish poet of the generation after Heaney, ""the man who could rhyme knife with fork"" (as another poet quipped), Muldoon finds his collected work seeing print a few months before his 50th birthday not bad for a farmer's son from Armagh. Though it includes no new poems, this big brick of a volume does make available several long-out-of-print early books, and it serves better than Muldoon's older selecteds to reveal the full range of his prodigious talents. There is the Frostian, anecdotal Muldoon of early work like ""The Big House"": ""I was only the girl under the stairs/ But I was the first to notice something was wrong."" There is the evasive, tough-guy Muldoon who wrote narrative poems, like ""The More a Man Has the More a Man Wants,"" about terror and gangsters in his native Ulster. There is the brilliantly canny and understatedly moving family elegist. There is the Muldoon whose oeuvre includes all shades of romantic and erotic emotion, from sexual disgust (""Aisling"") to long-married tenderness (""Long Finish""). There is the writer of serious, terse, effective political verse, the author of 100 haiku about suburban New Jersey, and the Muldoon who recreated the sonnet in his own image. And, most famously, there is the postmodern comic, who claims to be ""my own stunt double,"" and who explains in another recent poem: ""A bird in the hand is better than no bread./ To have your cake is to pay Paul."" Muldoon (who now teaches at Princeton and Oxford) may yet expand his range even further; for now, the Muldoons are all here, in force and in bulk. Most readers of poetry will need to deal with them. (Apr.) Forecast: The eight or so separate Muldoon volumes on the shelves had the effect of putting off first-time readers, and making a diverse body of work seem diffuse. This collection corrects both problems, and makes Muldoon's first half-century a one-shot buy for libraries and consumers alike. If reviewers take this chance to sum up the career, this book could put Muldoon in Heaney's neighborhood.
close
Details