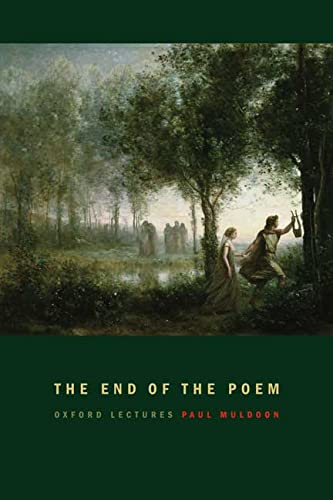 The End of the Poem: Oxford Lectures

In his most substantial prose collection to date, Pulitzer Prize–winning poet Muldoon ( ) offers 15 characteristically idiosyncratic lectures on individual poems by a host of influential world poets, delivered at Oxford University from 1999 to 2004. Rather than explication and clarification, Muldoon favors association and surprise, as he does in his poems. In discussions of often lesser-known poems by major figures, beginning with W.B. Yeats and moving through Emily Dickinson, Ted Hughes, Elizabeth Bishop, Robert Lowell, Fernando Pessoa and Irish-born Muldoon's own mentor, Seamus Heaney, Muldoon focuses on the recurrence and etymology of particular words as they relate to other poems and poets, quoting the almost as often as poetry. He also locates the poems' origins in other unlikely texts, such as a little-known 1851 article, which Muldoon claims influenced Dickinson. While some of Muldoon's conjectures may seem far-fetched, they are always highly compelling and clever, and this book provides an expansive view of the mind of a major poet, and a fresh, if unorthodox, method for reading literary texts. This volume is released concurrently with , a new collection of poems (Reviews, July 31).