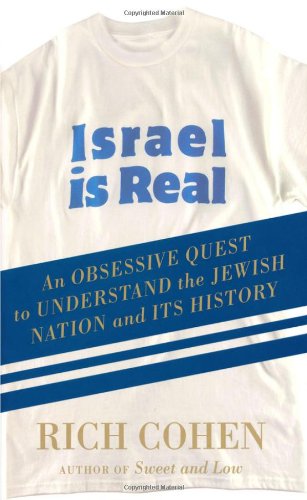 Israel Is Real: An Obsessive Quest to Understand the Jewish Nation and Its History

Reading the Bible and Jewish history “both literally and symbolically,” this eclectic and passionate, wide-ranging history of Israel and Zionism by the author of decodes the story of Jonah in the whale's belly as the Diaspora Jew in Nazi concentration camps. Cohen catalogues the accomplishments of first-century Jewish scholar Jonathan ben Zakkai in the way Willie Dixon catalogues a man's deeds in a blues song, and summons Kierkegaard and Allen Ginsberg as he muses about Abraham, a crazy old man willing to murder his son to earn God's blessing: “Everything in Judaism is a repetition of this scene,” Cohen asserts. Of Herzl, he says it was his career writing whimsical newspaper essays that made his mind fluid and open to the vision of Zionism. He sees Ariel Sharon as a tragic Shakespearean character who was driven to dismantle the settlements in Gaza out of a great love for Israel. Finally, Cohen does not believe that the Holocaust justifies the state of Israel—or that Israel needs to be justified. Cohen's idiosyncratic yet often lyrical take on Israel is sometimes exasperating but always deeply felt and refreshing.