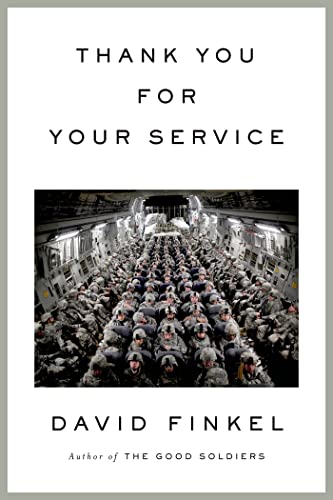 Thank You for Your Service

From April 2007 to April 2008, Finkel, a MacArthur Fellow and Pulitzer Prize–winning reporter with the Washington Post, spent a total of eight months embedded in eastern Iraq with the young infantrymen of the 2-16 as their battalion fought desperately to survive and to make Bush’s troop surge a success. In 2009’s The Good Soldiers (one of Publishers Weekly’s Best Books of the Year), he chronicled their harrowing day-to-day experiences—as their trust in the Iraqi people eroded, their nerves and comrades were shot, and IED after IED exploded. In this incredibly moving sequel, Finkel reconnects with some of the men of the 2-16—now home on American soil—and brings their struggles powerfully to life. These soldiers have names and daughters and bad habits and hopes, and though they have left the war in Iraq, the Iraq War has not left them. Now the battle consists of readjusting to civilian and family life, and bearing the often unbearable weight of their demons. Some have physical injuries, and all suffer from crippling PTSD. And as if navigating their own mental and emotional labyrinths weren’t enough of a challenge, they must also make sense of the Dickensian bureaucracy that is the Department of Veterans Affairs. Told in crisp, unsentimental prose and supplemented with excerpts from soldiers’ diaries, medical reports, e-mails, and text messages, their stories give new meaning to the costs of service—and to giving thanks. Photos. Agent: Melanie Jackson, Melanie Jackson Agency. (Oct.)
close
Details