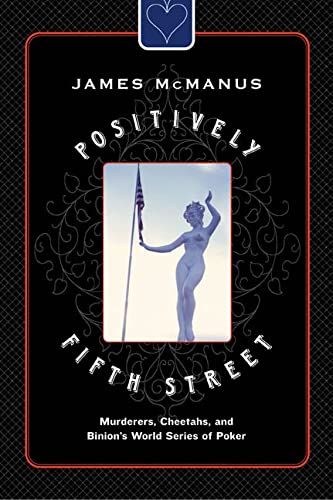 It's the fantasy of many a red-blooded American male, and increasingly, many a female: to stare down a grizzled "rounder" (or professional) in the final hand to win the million-dollar prize of the world's biggest poker tournament. magazine sent poet and novelist McManus (, etc.) to cover the 2000 event in Las Vegas. Playing in his first tournament, he was more successful than anyone could have dared hope. For a writer, this is the equivalent of drawing a straight flush—no small part of the appeal here is watching McManus as he skillfully converts a chance into a sure thing. Moreover, coinciding with the tournament that year was the salacious trial of the murderer of Ted Binion, legendarily profligate scion to the family that created the event. He probes the trial at length, but the theme—scummy people are capable of scummy behavior—is hardly as interesting, and the book always perks up when McManus returns to the green felt, where "flop" and "river" can combine to end the author's streak at any moment. Of course, opponents and spectators alike were well aware of McManus's identity as erudite literatus and tourney neophyte—which at once made him prey and permitted him to play possum. While refusing to downplay his No Limit Hold'em chops (earned by practicing with a computer program), McManus modestly charts his delirium as he prevailed in one nervy confrontation after another. The drama of high-stakes poker is inherently compelling—here is a rare opportunity to read an account by someone who can really write. B&w illus.