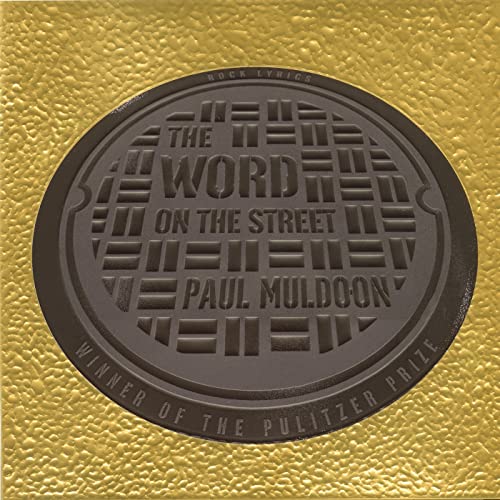 The Word on the Street: Rock Lyrics

In addition to his 11 books of poetry, the Irish poet has long produced words for singers, first with the opera composer D.A. Hagen and latterly with his own rock band, Wayside Shrines. This first collection of Muldoon’s rock lyrics shares topics and effects with his best-known poems: they are knowing, at times risque, elaborately playful in their vocabulary, and fascinated by self-destruction, drug addiction, Irish heritage, and working-class New Jersey. They can wink at the listener, or revel in names: Ian Dury, “Lennon and McCartney,” Elizabeth Bowen (rhymed with Leonard Cohen), Michael Jackson, Fred Astaire, Botticelli, Machiavelli, “Clint.” At the same time they have the simple and singable syntax and rhyme schemes that rock songs often need, suggesting sometimes Muldoon’s idol Warren Zevon. Remembering a big sign on a bridge over the Delaware River (“Trenton Makes, the World Takes”) the mopey, comic breakup song “Over You” begins “The things they make in Trenton/ Are taken by the world/ You were made in Trenton/ I took you for my girl.” Like most rock lyrics, these seem thin apart from their music—no careful admirer would mistake them for Muldoon’s strongest poems, though they nonetheless offer many pleasures. (Feb.)
close
Details