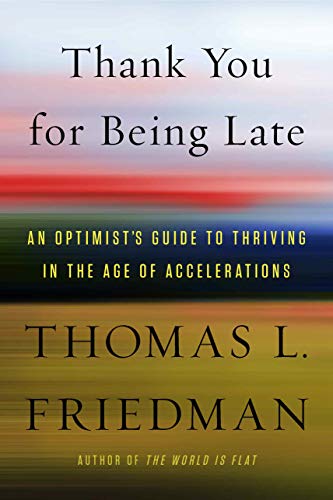 Thank You for Being Late: An Optimist’s Guide to Thriving in the Age of Accelerations

Friedman (coauthor of That Used to Be Us), a three-time Pulitzer Prize winner for his work as a reporter with the New York Times, engages in an intelligent but overlong discussion of the faster paces of change in technology, globalization, and climate around the world. His core argument is that “simultaneous accelerations in the Market, Mother Nature and Moore’s law” (the principle that the power of microchips doubles every two years) constitute an “Age of Accelerations,” in which people who feel “fearful or unmoored” must “pause and reflect” rather than panic. Friedman opens with slow-paced, wordy, and at times highly technical discussions of each of his accelerations, with examples that include solar-powered waste compactors, pedometer-wearing cows, the Watson computer’s wrong answer on Jeopardy!, and geopolitics. He then offers personal and policy recommendations for coping with accelerations, such as self-motivation, a single-payer health care system, lifelong learning, and encouraging more people to follow the Golden Rule. Unfortunately, Friedman’s intriguing facts and ideas are all but buried under too many autobiographical anecdotes and lengthy recollections about the circumstances of interviews he conducted and research he completed, giving readers the recipe and history of all the ingredients along with the meal. Agent: Esther Newberg, ICM. (Nov.)
close
Details