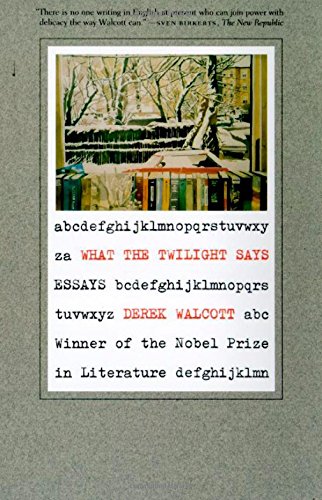 What the Twilight Says: Essays

In essays originally published between 1970 and 1997, Walcott, winner of a Nobel prize in 1992 for his poetry and plays (Omeros, The Bounty), engages with literature, politics and their intersection. This is Walcott's first prose collection but the writing here is so intense that it threatens to disintegrate into lyric; in fact, the pieces deserve to be read aloud for their finely wrought metaphors, their intelligent, conversational observations and the beauty of their sound. Brilliant insights come suddenly, even unexpectedly, as in the aside that ""reading [Wallace] Stevens is like having Chocolate for breakfast."" Most of the essays are considerations of a wide range of writers such as Patrick Chamoiseau, Joseph Brodsky and Ernest Hemingway. The remaining few, including the Nobel prize address, ""The Antilles: Fragments of an Epic Memory,"" are intense meditations on the state of West Indian writing and culture. A recurring concern is the relation of the postcolonial writer to the imperial language: Walcott, who now lives in both the United States and his native St. Lucia, describes ""barbarian Bards"" who ""recite long passages of the imperial literature as if it were their own; and with a vigour, even a love, that brings a blush to the civilized cheek."" But while he criticizes V.S. Naipaul for turning his back on the West Indies, and praises card-carrying anti-imperialists like C.L.R. James and Aime Cesaire, Walcott is no hard-liner. He is indignant toward those who reject any aspect of the West Indian heritage, whether it be African, Asian, indigenous American or European, acting on his own contention that poetry must not dwell on the scars of history, but should instead embrace the beauty and the possibilities of the present. (Nov.)
close
Details