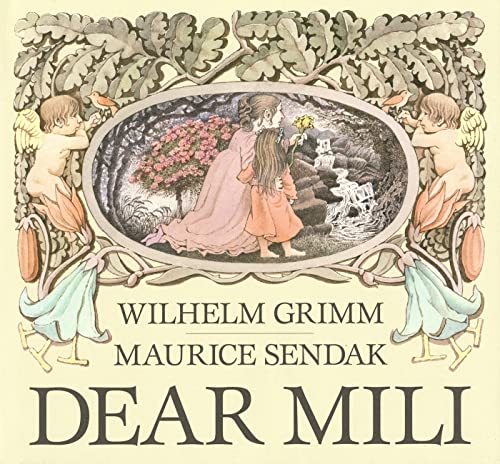 Preserved in a letter written to a young girl, Mili, in 1816 and not discovered until 1983, the Grimm story is prefaced by a tender address in which he underscores the story's message: although there are many obstacles that can prevent people from being together, ``one human heart can go out to another, undeterred by what lies between.'' The story that follows implies that love transcends even death. Like many fairy tales, this one deals with extraordinary events. A widow sends her child into the forest to protect her from an approaching war. The girl is led by her guardian angel past menacing cliffs and chasms to the house of Saint Joseph with whom she lives for three days. Before she goes back to the village, Saint Joseph gives her a rosebud as a symbol of her return to paradise; when the girl reaches her home, she finds that the three days have been in reality 30 years. ``God has granted the widow's last wish'' to see her daughter once again. In the morning, mother and child are found dead, with Saint Joseph's rose ``in full bloom.'' Sendak's haunting interpretation of this stark tale is often more emotionally compelling than the story itself. Dear Mili is a variation on the themes of loss, separation and love that Sendak has explored before, most recently in Outside Over There . In the tradition of 19th century Sunday school literature, the plot and language of the text are often predictable and obviously preachy. For example, after Mili's long journey and prayer, a cleansing rain falls: ``God and my heart are weeping together,'' she says. In an attempt to transcend the limitations of the religious story, Sendak infuses it with images that are both nonsectarian and universal. Trees and roots in the valley of death become grasping, whitened bones scattered beneath an outline reminiscent of buildings at Auschwitz. The images are rich: dark clouds of war are etched with claws of yellow fire, and paradise is filled not only with music, but with lush flowers that burst, like those of Van Gogh or O'Keeffe, with passionate life. The volume may have more appeal for adults than for children, but nonetheless it contains unforgettable artwork of resonant power. Michael di Capua Books. All ages. (Oct.)
close
Details