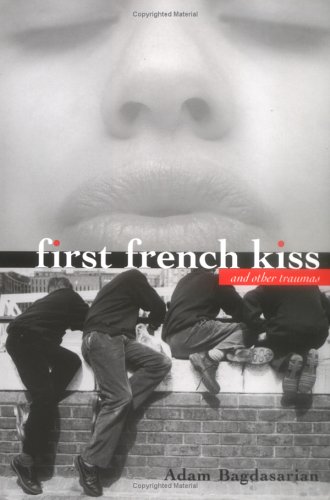 FIRST FRENCH KISS: And Other Traumas

This volume of brief, sparely wrought stories encapsulates significant moments during a boy's youth. Writing alternately in the voice of the boy, Will, and in third person, Bagdasarian () poignantly re-creates universal "traumas," both minor and major. Some vignettes are humorous, such as Will's account of his disappointingly unromantic first make-out session, his memory of being Scotch-taped by his older brother and his explanation of how he became one of the "popular boys" at age 10. Other scenes, more somber in tone, evoke Will's recurring fears and expanding knowledge of mortality. The narrator's obsession with the aging process, eloquently expressed in "Time" ("His heart was sick with sorrow and nostalgia and grief and the knowledge that even this moment was doomed to pass"), foreshadows the death of Will's father. Although the entries are not arranged in chronological order, readers will perceive Will's steady forward movement. And if the shifts between first and third person don't enhance the storytelling, the narrative is nonetheless evocative in its entwinement of childlike candor with adult wisdom. Ages 12-up.