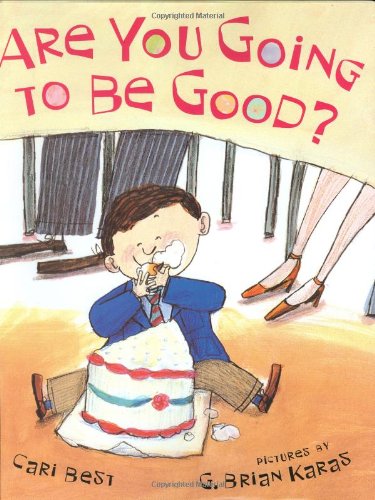 Are You Going to Be Good?

For Robert, the young hero of this expert and empathic comedy of manners,an invitation to a fancy family party has its pros and cons. Being allowed to stay up way past "pajama time," putting on smart-looking duds "just like his daddy" and goofing off in a stuffy men's room are all good; but being reprimanded at every turn with a whispered " !" is no fun at all. Best ( ) possesses a perfect ear for the cadences of children's conversations. In the car on the way to the party, his mother, father and big sister all give him advice ("Remember not to mumble.... Some old people aren't good at hearing," says sister Alice), to the point where Robert replies, "Okay. Okay. Okay.... I'll remember everything"). Luckily, Robert's irrepressible spirit strikes a chord with none other than the guest of honor, 100-year-old Great-Gran Sadie. When Robert starts dancing "like a firecracker ready to explode," the birthday girl "kicks off her pointy shoes and starts to dance, too." Best zeroes in on both the joys of childhood and the bewilderment of kids being initiated in the rituals of adult life. Karas's ( ) jewel-toned, childlike renderings and observations of the uninhibited, charming hero will immediately strike a chord with youngsters; the party scenes are spot-on, such as the one in which Robert spits a torrent of yucky pink punch back into his cup. Ages 3-6.