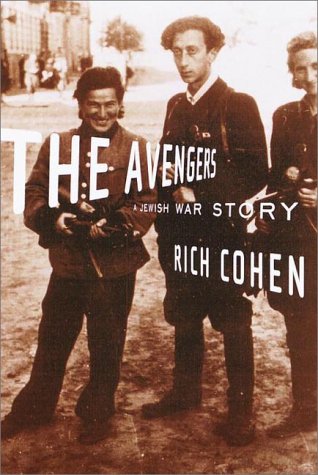 The Avengers: A Jewish War Story

As a child visiting an Israeli kibbutz on a family vacation, Cohen met a relative who had survived the Holocaust and emigrated to Israel. Slight and gray-haired, Ruzka looked a lot like Cohen's grandmother, but her stories introduced him to a little-known, remarkable group of Jews: the Avengers, who fought Nazis in the gloomy forests of Eastern Europe and later battled for Israel's independence. As Cohen notes, these ""were the kind of people who inspired Joseph Goebbels to write in his diary, `One sees what the Jews can do when they are armed.'"" An ardent Zionist, Ruzka left her home in Poland in 1939, as German troops were occupying the country, and made her way to Vilna, Lithuania, where she hoped to find passage to Palestine. Arrested as an ""illegal immigrant"" upon her arrival, she was released through the efforts of a Zionist youth group who gave her shelter in their headquarters. There, Ruzka met Vitka Kempner, another young girl on her own, and Abba Kovner, a charismatic young man whose steadfast belief in resistance and canny strategies inspired the Avengers. In period-perfect detail, Cohen portrays scenes of ghetto life in Vilna, the efforts of a Jewish leader who thought he could help his people by collaborating with the Germans and, above all, the riveting story of the Avengers' escape from the ghetto, their acceptance of a renegade German officer who hated his army and their eventual emigration to Palestine. Cohen (Tough Jews: Father, Sons and Gangster Dreams) delivers a compelling story that not only amplifies the accepted version of Jewish experience in the Second World War, but also provides a terrific narrative of courage and tenacity. Photographs. (Sept.)
close
Details