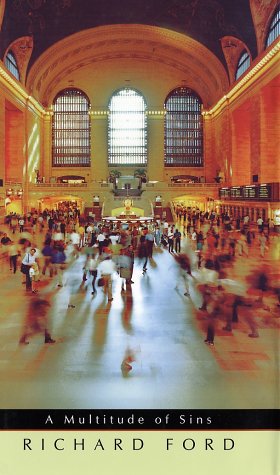 A MULTITUDE OF SINS

Tracing the blueprint of human interaction in this latest collection of nine short stories and a novella, Ford signals the master text of lust standing behind the multitude of small sins he so tersely and poignantly chronicles. To err is human, and, in Ford's worldview, little is so human as the act of cheating on a wife or husband. In "Charity," a married ex-cop turned successful toy-maker, Tom Marshall, is caught by his wife, Nancy, a lawyer, having an affair. Johnny, the narrator of "Reunion," reflecting on his affair with Beth Bolger, sums it up like this: "At any distance but the close range I saw it from, it was an ordinary adultery—spirited, thrilling, and then... it became disappointing and ignoble and finally almost disastrous to those same people." The novella, "Abyss," the collection's finest entry, tells the story of Frances Bilandic, a go-getting real estate agent with an older, invalid husband, and Howard Cameron, an ex-jock real estate agent with a more privileged background. They meet at an awards dinner in Mystic, Conn., and are soon screwing each other in hotel rooms in "little nowhere Connecticut towns." When both are sent to a convention in Phoenix, they look forward to time together, but Frances discovers Howard is a selfish putz, while Howard decides Frances is a little trashy and ditzy. Their extended outing ends in real disaster when Frances decides she wants to see the Grand Canyon. Ford's execution is flawless; this story has a canonical heft to it, bearing comparison to the best of Flannery O'Connor. Its presence alone makes this collection an essential volume, and the rest of the stories hold their own alongside it.