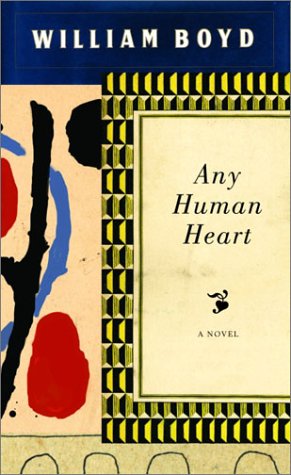 ANY HUMAN HEART: The Intimate Journals of Logan Mountstuart

Surely one of the most beguiling books of this season, this rich, sophisticated, often hilarious and disarming novel is the autobiography of a typical Englishman as told through his lifelong journal. Born to British parents in Uruguay in 1906, Logan Mountstuart attends an English prep school where he makes two friends who will be his touchstones for the next eight decades. The early entries in his journal, which record his sexual explorations and his budding ambitions, provide a clear picture of the snobbery and genteel brutality of the British social system.

Logan is a decent chap, filled with a moral idealism that he will never lose, although his burning sense of justice will prove inconvenient in later years. He goes down from Oxford with a shameful Third, finds early success as a novelist, marries a rich woman he doesn't love, escapes to Spain to fight in the civil war and is about to embark on a happy existence with his second wife when WWII disrupts his and his generation's equilibrium. He's sent on a naïve spying mission by British Naval Intelligence and imprisoned for two years. On his release, he finds that tragedy has struck his family. Logan's creativity is stunted, and he slides into alcoholism, chronic infidelity and loneliness. "I believe my generation was cursed by the war," Logan says, and this becomes the burden of the narrative. He resorts to journalism to earn a living, specializing in pieces about the emerging stars of the art world, whom he encounters—somewhat like Zelig—in social situations. Logan's picaresque journey through the 20th century never seems forced, however. His meetings with Picasso, the Duke and Duchess of Windsor, Hemingway and Ian Fleming are adroitly and credibly interposed into the junctures of his life.

This flawed yet immensely appealing protagonist is one of Boyd's most distinctive creations, and his voice—articulate, introspective, urbane, stoically philosophical in the face of countless disappointments—engages the reader's empathy. Logan is a man who sees his bright future dissipate and his great love destroyed, and yet can look back with "a strange sense of pride" that he's "managed to live in every decade of this long benighted century." His unfulfilled life, with his valiant efforts to be morally responsible, to create and, finally, just to get by, is a universal story, told by a master of narrative. Boyd, back in top form, has crafted a novel at least as beautifully nuanced as and . Logan's journal entries are so candid and immediate it's difficult to believe he isn't real. And after 496 pages, it's hard to say good-bye.