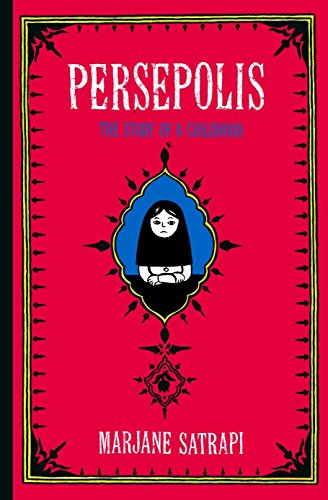 PERSEPOLIS: The Story of a Childhood

Satrapi's autobiography is a timely and timeless story of a young girl's life under the Islamic Revolution. Descended from the last Emperor of Iran, Satrapi is nine when fundamentalist rebels overthrow the Shah. While Satrapi's radical parents and their community initially welcome the ouster, they soon learn a new brand of totalitarianism is taking over. Satrapi's art is minimal and stark yet often charming and humorous as it depicts the madness around her. She idolizes those who were imprisoned by the Shah, fascinated by their tales of torture, and bonds with her Uncle Anoosh, only to see the new regime imprison and eventually kill him. Thanks to the Iran-Iraq war, neighbors' homes are bombed, playmates are killed and parties are forbidden. Satrapi's parents, who once lived in luxury despite their politics, struggle to educate their daughter. Her father briefly considers fleeing to America, only to realize the price would be too great. "I can become a taxi driver and you a cleaning lady?" he asks his wife. Iron Maiden, Nikes and Michael Jackson become precious symbols of freedom, and eventually Satrapi's rebellious streak puts her in danger, as even educated women are threatened with beatings for improper attire. Despite the grimness, Satrapi never lapses into sensationalism or sentimentality. Skillfully presenting a child's view of war and her own shifting ideals, she also shows quotidian life in Tehran and her family's pride and love for their country despite the tumultuous times. Powerfully understated, this work joins other memoirs—Spiegelman's and Sacco's —that use comics to make the unthinkable familiar.