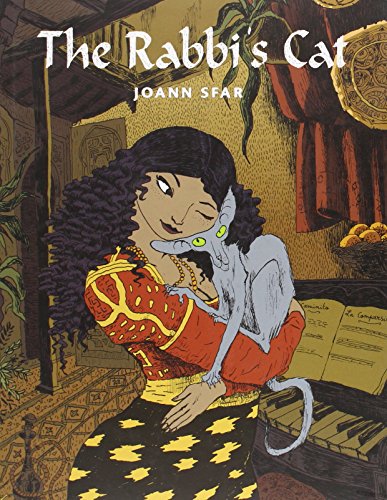 Sfar, the French cartoonist behind the Little Vampire children's books, has come up with a hilarious and wildly original graphic novel for adults. The nameless, scraggly-looking alley cat who narrates the story belongs to an Algerian rabbi in the '30s. When the cat eats a parrot, he gains the power of speech and tries to convince his master to teach him the Torah, raising the question of whether the appropriate age for his bar mitzvah should be in human years or cat years. Of course, being a cat, he has plenty of impertinent opinions about Judaism. That's a delicious setup on its own, but it gets better when the cat loses his speech again halfway through, and the story becomes a broader, more bittersweet comedy about the rabbi's family and the intersection of Jewish, Arab and French culture. The rabbi's daughter Zlabya marries a young man from a nonobservant family in France. The Algerian family's visit with their Parisian in-laws is the subject of the final and funniest section of the book. Sfar's artwork looks as mangy and unkempt as the cat, with contorted figures and scribbly lines everywhere, but there's a poetic magic to it that perfectly captures this cat's-eye view of human culture and faith.