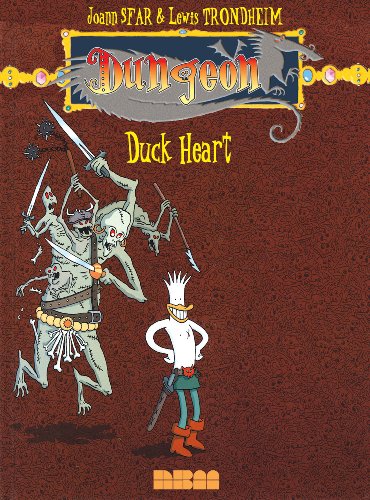 For the first time, Sfar and Trondheim's extensive series of French comics parodying the sword and sorcery genre has been collected into an American volume. The series' unlikely hero is Herbert, a talking duck who works as a dungeon keeper's flunky. In the first story, Herbert, unable to fetch a barbarian to battle the dungeon keeper's adversaries, impersonates a warrior and embarks on the mission himself. Herbert is a traditional comedy figure, a boastful, cowardly impostor. Accompanying him is Marvin, a competent fighter and vegetarian dragon. Though these stories are inventive, they appear to have lost something in translation, as they are rarely truly witty or funny. For example, at one point Herbert and Marvin pose as interior decorators to gain admission to the villains' lair. But the creators seem satisfied merely with establishing the premise rather than building on its comedic potential. In the second story, Herbert undergoes training as a warrior from Marvin's former master, who proves to be cruel and manipulative. In a startling sequence, the master's prize pupil corrupts a tribe of hunters with a lust for wealth and power, whereupon they enslave a community of peaceful shepherds. This serious, ambitious indictment of war and inequality is impressive. The artwork is beautiful (both Trondheim and Sfar are award-winning artists), but the preference for long shots distances readers from the characters.