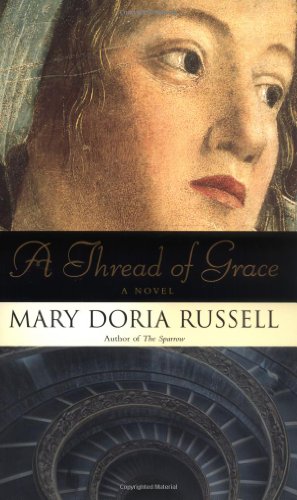 A THREAD OF GRACE

Busy, noisy and heartfelt, this sprawling novel by Russell—a striking departure from her previous two acclaimed SF thrillers, and chronicles the Italian resistance to the Germans during the last two years of WWII. Three cultures mingle uneasily in Porto Sant'Andrea on the Ligurian coast of northwest Italy—the Italian Jews of the village, headed by the chief rabbi Iacopo Soncini; the Italian Catholics, like Sant'Andrea's priest Don Osvaldo Tomitz, who befriend and shelter the Jews; and the occupying Germans invited by Mussolini's crumbling regime. In the last camp is the drunken, tubercular Nazi deserter, Doktor Schramm, a broken man who confesses to Don Osvaldo that while working in state hospitals and Auschwitz, he was responsible for murdering 91,867 people. Meanwhile, Jewish refugees in southern France, including Albert Blum and his teenage daughter, Claudette, are fleeing across the Alps to Italy, hoping to find sanctuary there. Russell pursues numerous narrative threads, including the Blums' perilous flight over the mountains; Italian Jew Renzo Leoni's personal coming to terms with his participation in the Dolo hospital bombing during the Abyssinian campaign in 1935; the dangerous frenzy of the Italian partisans; and the bloody-mindedness of German officers resolved to carry out Hitler's murderous racial policy despite mounting evidence of its futility. The action moves swiftly, with impressive authority, jostling dialogue, vibrant personalities and meticulous, unexpected historical detail. The intensity and intimacy of Russell's storytelling, her sharp character writing and fierce sense of humor bring fresh immediacy to this riveting WWII saga.