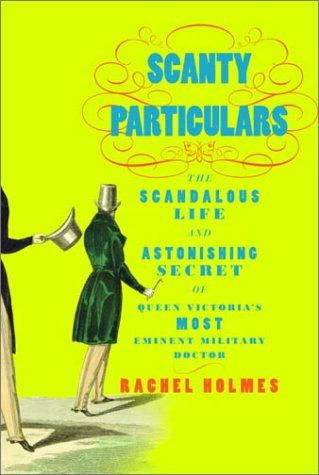 This fascinating exploration of the life of James Barry, a British doctor who, as Holmes shows, was one of the leading and most controversial innovators of 19th-century medicine, might be seen as an academic version of the movie . Holmes offers an enticing portrayal of early 19th-century medicine as she traces the rise of the once-poor Barry, a dandy who quickly became a crusading physician in colonial medicine, performing one of the world's first cesarean sections, and a leading proponent of health care for women and the poor. She also traces his fall—Barry was relieved of his position of medical inspector after a celebrated trial in which he and a friend, Lord Somerset, were charged with homosexuality and incest. Despite this demotion, he continued to practice medicine in several British colonies for several decades. But Barry's "scandalous life" is outdone by his "astonishing secret." Barry's sexuality was a matter of great speculation during his life—and became even more so in both historical and fictional portrayals after his death. Without sensationalizing, Holmes makes a thorough reading of historic sources, exploring whether Barry was a man, woman or a hermaphrodite—and how this affected his work. At times, her language is academic and tendentious: "Like justice, Barry held the rich and poor in equal balance in the scales of his treatment." But more often than not, Holmes (the Web site manager of Amazon.co.uk) makes her biography of this outsider as compelling as the life it describes.