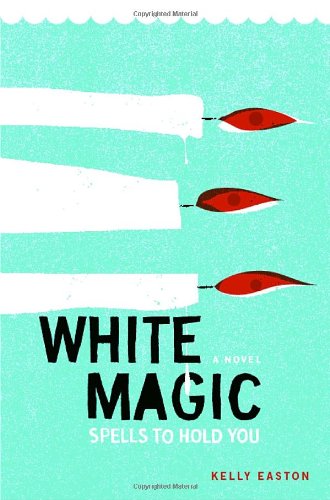 White Magic: Spells to Hold You

Easton ( ) starts off strong but juggles one too many plot lines in this overly ambitious novel narrated by four different characters. Fifteen-year-old Chrissie has moved from rural Vermont to Los Angeles, where her mother has landed a job—complete with fancy condo and wealthy employer turned fiancé—but Chrissie still pines for her late dad and her best friend back “home.” Enter two witches, Yvonne and Karen, who welcome Chrissie into their coven. They have problems of their own: Yvonne's father kidnapped her away from her incompetent Gypsy mother in Europe years earlier; and Karen, pretty but none too bright, doesn't seem to realize when guys are using her. Now Karen thinks she's in love with Jimmy, the fourth narrator, but he'd rather hook up with Yvonne, who's not interested; on the other hand, Jimmy drinks so heavily that he doesn't care all that much anyway. The author doesn't draw enough connections among the spells cast by the girls, their behavior and a rapid succession of shocking events: Karen's quasi–suicide attempt, Jimmy's arrest on a felony charge and the sudden appearance of Yvonne's mother. While there are good ideas here, as well as the keen observations that Easton's admirers can expect, the characters are not developed enough to support the dramas they are made to play out. Ages 12-16.