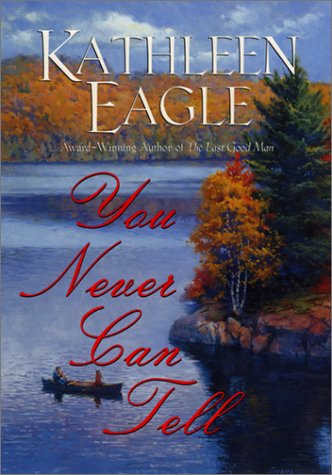 YOU NEVER CAN TELL

Kole Kills Crow is a perfect romance hero—brooding, dangerous, "other"—cast in the same mold as a gypsy from the wild moors, or a rogue who is no longer received in Charleston. Kills Crow is a hero of the Native American movement, a terrorist according to the law and possibly a murderer. Now he lives like a fugitive, holed up in a remote cabin, until he is discovered by journalist Heather Reardon. Sexy and feral as his wolf-dog, he possesses an unpredictable cruel streak balanced by a dash of tenderness and sensitivity—he is also a maker of fine, highly prized flutes. Once Heather locates him in a honky-tonk, she inveigles him into dancing with her and then convinces him to let her into his life so she can tell his story. "This would be more than an interview. She believed him to be one of a rare breed, maybe even a dying breed of men... a true champion of the people." Thus begins a long tease. There is much inane, double-entendre conversation as the two move inevitably through mistrust to lust to true love. Along the way, there are political issues to settle, and a quest for fairness for Native Americans leads to an intense climax under the Hollywood sign above Los Angeles. Eagle (; ) won't disappoint her fans with this spicy, fast-paced tale.