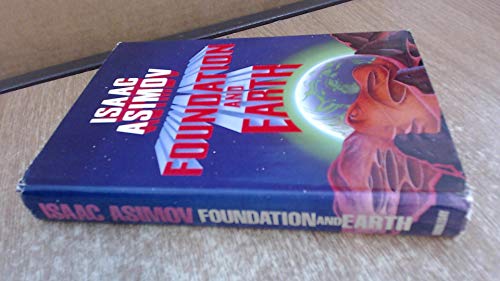 The fifth novel in Asimov's popular Foundation series opens with second thoughts. Councilman Golan Trevize is wondering if he was right to choose a collective mind as the best possible future for humanity over the anarchy of contentious individuals, nations and planets. To test his conclusion, he decides he must know the past and goes in search of legendary Earth, all references to which have been erased from galactic libraries. The societies encountered along the way become arguing points in a book-long colloquy about man's fate, conducted by Trevize and traveling companion Bliss, who is part of the first world/mind, Gaia. Springing from the same impulse that has fed his myriad nonfiction work, the novel's debate is enlivened by Asimov's fervid curiosity and his restless urge to explain everything, right down to the human passions that have largely vanished from his fiction. In fact, the characters, the tie-ins to Asimov's Robot series and the search's revelations suffer from the impersonal neatness that has handicapped Asimov's other fiction. He has, however, found an ingenious way around his clumsiness with novelistic narrative by employing a formal fairy tale structure in which the different worlds represent tasks or gifts or wishes, their fair aspect hiding a deadly surprise. As a result, this rather lightweight addendum to the series breathes in a way his heavier, more substantial books seldom do. Paperback rights to Ballantine/Del Rey; BOMC alternate. (October 3)
close
Details