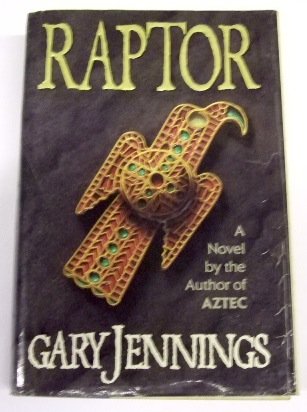 In the opening pages of Jennings's ( Aztec ) massive, audacious historical novel about the Gothic conquest of the Roman Empire, Thorn, the hermaphrodite hero/heroine, is seduced first by a monk and then by a nun. Evicted from a monastery and a convent, Thorn is then schooled in the ways of the world by the grumpy, blasphemous woodsman Wyrd. Rugged yet sensitive, usually dressed as a man, Thorn is to elim fragment raptorial (i.e., predatory) in his thirst for lovers, male and female, and for adventure. He serves as field marshal, sidekick and spy for bloody Theodoric (A.D. 454-526), king of the Ostrogoths, depicted here as a benevolent despot. For all its sexual titillation and gory battles, this majestically paced epic with its unconventional hero consistently rewards as it leads readers through exotic byways of the fragmented Roman Empire, delving into pagan customs, Christian mysteries, corruption, slavery and the tolerant Arianism embraced by the Goths but condemned by the Catholic Church as a heresy. Through the androgynous Thorn, attuned to the war betwen the masculine and feminine sides of his nature, Jennings subtly explores the gender-based roles imposed by society. Spiced with medieval flavor, the novel will captivate readers willing to commit themselves to a long, detailed, sometimes ploddingly written but ultimately intoxicating narrative. (June)
close
Details