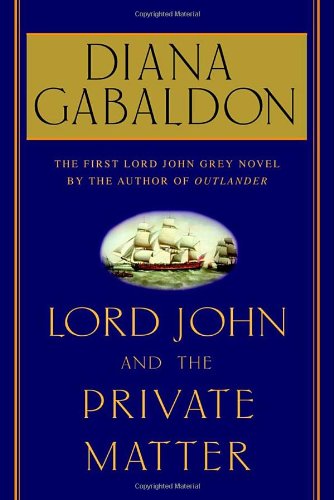 LORD JOHN AND THE PRIVATE MATTER

Trouble befalls Lord John Grey (fresh from minor roles in Gabaldon's bestselling Outlander novels) when he accidentally discovers that the Hon. Joseph Trevelyan, his cousin's betrothed, may have what those in 1757 termed "the pox" or "the French disease"—syphilis. Before he can figure out an appropriate way to handle this delicate matter, he becomes involved in the investigation of the mysterious and grisly murder of a military colleague suspected of being a spy. Gabaldon (;; etc) stitches these two plots together into a compelling narrative that also offers a wealth of juicy details about 18th-century London, especially its homosexual underbelly. Lord John, who reminisces about his dead lover, Hector, and the "lean, hard body" of an old flame, learns that Trevelyan may be traveling from one house of ill repute to another of a different sort: at the Lavender House, both buyers and sellers are men. Among his various trials and tribulations, Lord John must discern the identity of a mysterious figure in a green velvet dress spotted in both of these establishments and investigate the mysterious death of a similarly attired man, found with his face bashed in. Grey is a competent and likable sleuth, and Gabaldon's prose is crisply elegant. Her many fans will be happy to learn that this is the first in a series about the travails of Lord John Grey.