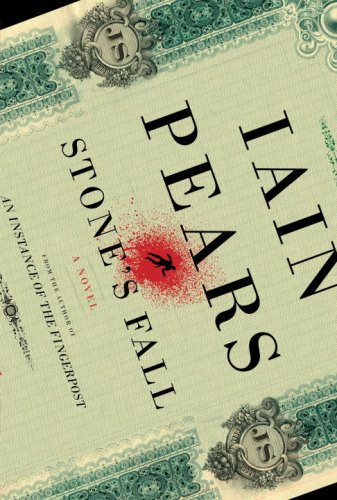 British author Pears matches the brilliance of his bestselling (1998) with this intricate historical novel, which centers on the death of a wealthy financier. In part one, after John Stone falls to his death from a window in his London mansion in 1909, Stone's seductive, much younger widow, Elizabeth, hires Matthew Braddock, who works as a journalist, to trace a child of her late husband's she never knew existed until the child is named in his will. Braddock, a novice in the world of finance, uncovers evidence that Stone's actual net worth was far less than commonly believed, even as he finds himself falling for his client. In part two, set in 1890 Paris, Henry Cort, a shadowy spy, provides another perspective on the bewitching Elizabeth. Stone's own reminiscences from his time in Venice in 1867 cast further light on the circumstances of his demise. The pages will fly by for most readers, who will lose themselves in the clear prose and compelling plot.