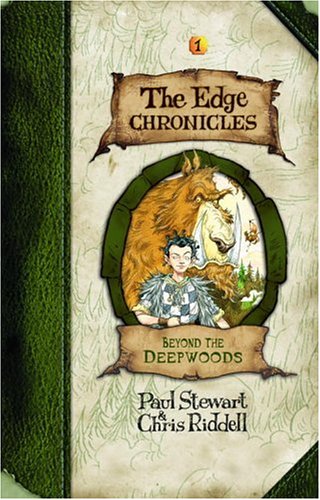 BEYOND THE DEEPWOODS: The Edge Chronicles, #1

This charming British series, the Edge Chronicles, makes a transatlantic crossing with its launch title, a handsomely designed paper-over-board volume with pen-and-inks by the authors. In poetic prose, Stewart and Riddell invent the magical realm that culminates at the Edge (a precipice that resembles "the figurehead of a mighty stone ship"). The flow of water that ceaselessly falls off the Edge originates in the Deepwoods, where "countless tribes and strange groupings scratch a living in the dappled sunlight and moonglow beneath its lofty canopy." Twig, who is nearly 13, lives with a family of woodtrolls, but his non-troll appearance (except for the pointy ears) marks him as an outcast; it is not a total surprise when his "Mother-Mine" reveals that he was dropped "at the foot of our tree" as an infant. And so begins a journey that leads Twig to his destiny, as the ominous caterbird tells him, which lies "beyond the Deepwoods." The narrative will cast a spell over readers from the beginning with its utterly odd, off-kilter sense of logic and a vocabulary that is equal parts Dr. Seuss and Lewis Carroll ("Fromps coughed and spat, quarms squealed, while the great banderbear beat its monstrous hairy chest and yodelled to its mate"). The detailed artwork with numerous comic touches also offer clues to Twig's parentage (he bears a certain resemblance to a dreaded sky pirate who makes an early appearance). Twig winds up at the Edge, and his decision at the chasm leads him to self- discovery—and nicely sets up the next adventure, ( ; also releasing this month), which sees Twig beginning his life as a sky pirate. Ages 10-12.