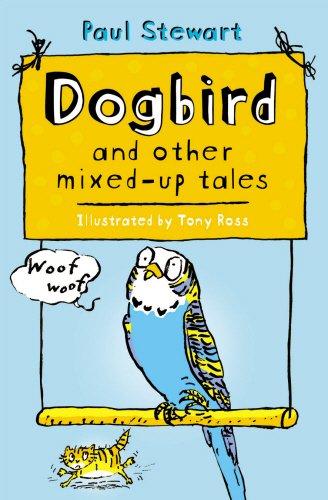 Dogbird: And Other Mixed-Up Tales

Stewart (coauthor with Chris Riddell of the Edge Chronicles and Far-Flung Adventures) presents a trio of fantasy-tinged stories, each featuring a quirky animal character and delivering a light moral with a large dose of humor. In the title tale, Alice's bright blue budgie barks back at her family's three boisterous dogs, causing such a clamor that everyone is at wit's end. The girl's attempt to solve the problem by setting the bird free (with a " " he "soared off into the sunset") backfires, but Alice devises the perfect solution: Dogbird goes to live at her grandmother's recently burgled house, where his barking will discourage other would-be prowlers. Delivering a wry lesson about greed, "The Were-Pig" introduces a boy who purloins a candy bar from a classmate; his grandmother warns him that he has brought upon himself a curse that will soon turn him into a half-human, half-pig monster ("Snout, trotters, curly tail—the whole caboodle," she warns). When her prediction comes true, he goes on an eating frenzy in the school cafeteria, creating messy mayhem. The final caper centers on a girl who is awakened too early each morning by a bewitched croaking frog, whose spell will be broken when the frog performs a good deed (he turns back into a boy). Ross's (the Amber Brown series) copious, whimsical line art conveys the antics of this spirited menagerie with characteristically amusing hyperbole (especially the were-pig). Ages 5-8.