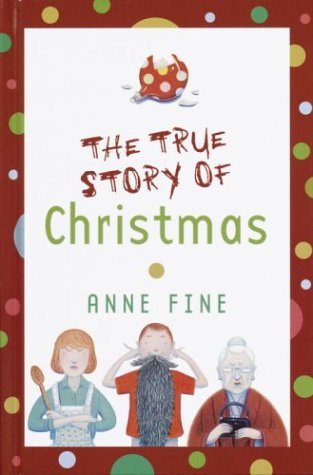 THE TRUE STORY OF CHRISTMAS

In what could be the funniest Christmas novel since Barbara Robinson's Fine () sends up the traditional family get-together with a chronicle of the two hideous days in which ridiculously rude relatives descend on narrator Ralph's home. There's Great-granny, whose idea of Christmas spirit is said to be "going off to look for some firstborns to slaughter"; show-offy and tale-bearing cousin Titania, who had been okay as a toddler "but then Aunt Susan decided that Titania was 'gifted' "; and a host of others, most of them occasioning wicked little subplots and all of them bearing at least a kernel of resemblance to people whom readers might know. Fine gleefully stokes the fires, leading up to the extended family's hilarious gift exchange: in an attempt to avoid the prior year's "ugly free-for-all grabbing," Ralph's mother insists that they be opened one-by-one—which enables the relatives to trace the multiple instances of gift recycling. Remarkably, Fine pulls this off without any cynicism—beneath her satire, rich veins of sympathy flow. Ages 10-up. (.)