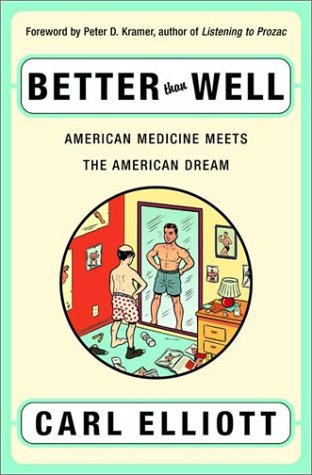 Elliott, a professor of bioethics and philosophy at the University of Minnesota, has discovered one of the biggest American maladies and fears—social phobia—and knows that Americans are on the hunt for the cure. His book reads like a travelogue that takes readers through the many forms of remedy, from Viagra, Paxil, and Botox, to the other American disease, "boredom" and our various responses to it. In the 19th century, "personalities were not just facades but outward indicators," he writes, that revealed you "as you really were." Adding to our self-consciousness, are "mirrors, photographs, films, television, home video, and the World Wide Web." We watch celebrities who are aware that they are being watched, and compounding the problem is "the strange loneliness and alienation that comes from watching." Arguing that "now we are excessively self-conscious about being self-conscious," Elliott, packing the book with intriguing examples of manifestations as well as cultural references, examines our self-consciousness and the roots of it. The writing is intelligent and thought provoking, but readers looking for a self-help book or any easy answer will not find it here.

as Listening to Prozac